Wolverhampton’s Marston’s has received an unsolicited non-binding proposal from the American firm Platinum Equity, regarding a possible cash offer for its share capital. Marston’s also called on Platinum to announce its firm intention to make an offer no later than 5pm on 26 February.

The company is currently valued at £555m, having seen its shares nosedive then partially recover since the outbreak of Covid-19. Marston’s made a total loss of £397.1m​ during twelve months to 3rd October 2020, following the closure of its pub estate for 15 weeks.

However, news of Platinum Equity’s interest today (29 January) saw the operator’s shares make a 16%, or 12p, leap to 87p. The news comes just weeks after Marston’s announced that it would operate SA Brain’s portfolio​ of 156 pubs in Wales on a combination of leased and management contract arrangements, safeguarding 1,300 jobs in December.

And a £780m Marston’s and Carlsberg joint venture to create the Carlsberg Marston’s Brewing Company was completed in August, following clearance from the Competition’s and Markets Authority. ​ That deal saw Marston’s hand over the keys to its beer business and become a ‘focused pub operator’​ for the first time in its near 200-year history.

There have been more than 180 mergers and acquisitions​ completed in the UK pub sector between the start of 2018 and end of 2019, including the taking over of Fuller’s by Japanese company Asahi and the £2.7bn acquisition​ of Suffolk-based brewer and pub operator Greene King by Hong Kong-based CK Bidco.

Marston’s previously known as Wolverhampton & Dudley Brewery has a history of over-extending itself with brewery acquisitions and putting itself at risk of being bought out.

It’s shocking how many traders in Wolverhampton still have Scores on the (urgent improvement necessary). The graphic below shows the listing accurate as of this afternoon.
On Monday Wolverhampton City Council announced its new Trade With Confidence scheme, to proved training and support for traders to aim for and achieve a top 5 rating.
It would help if all traders had to publicly display their ratings, so you should ask yourself: if the place you are about to eat does not have its food hygiene rating on prominent display, why is that?
The Council’s new website for Trade with Confidence is http://tradewithconfidence.org.uk/ 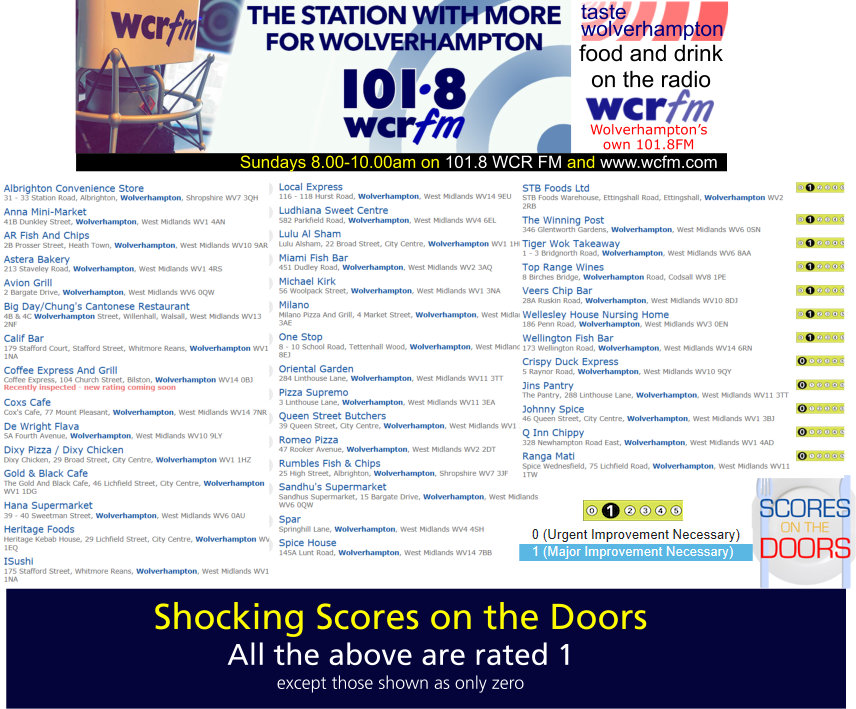 I was at the launch, and it sounds very promising.

I’ve long felt that the Scores on the Doors ratings for all premises selling food should be displayed by all shops, cafes and restaurants: not just those with a good score.

If you chat to people in the trade on a regular basis, as I do, you’ll know that it’s quite easy to make a silly slip-up that can get you a low score: forgetting to note a fridge temperature, for example. But it’s also easy to be re-assessed, which is what any self-respecting purveyor will do.

So, when you look at your Scores on the Doors app or the website and you see a result that horrifies you, it’s worth checking how recently an inspection took place. If it was very recently, then mention it if you are thinking of making a booking.

However, if the last inspection was several months ago, you have to ask why anyone with a low score has not insisted on a quick reinspection. It may be that inspectors are unavailable, or it may be that the owner simply isn’t that bothered.

You are the customer. Where you spend your money, and with whom you trust your safety, are your choices. Be careful out there. 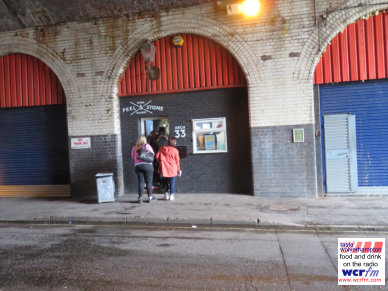 There is something romantic about artisan crafts tucked away in strange places: cheeses maturing in caves, fine vintage wines gathering dust in chateau cellars and, in much greater number than I expected, shops and bakeries.

If visible to the public at all, it is often a small retail frontage with tightly packed wares, while the main workings of the bakery are further inside the hefty structures that hold up the railway lines, trains and passengers.

Bakeries in the Big City 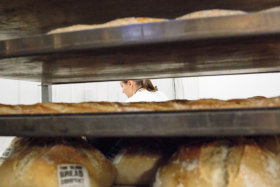 Nick May of the Slow Bread Company in London apologised for shattering my romantic illusions. He and his wife set up their family business after years of baking naturally leavened bread for family and friends.

They needed an affordable location with three phase power for the ovens that was close to the pubs and restaurants they supply, rather than a distant industrial estate.

Rents are reasonable and train noise is not a problem. Nick says you can use the tube trains like a clock: they start at 5.20am every day. But temperature control is something you must live with: proving your bread is quicker in summer than in winter. 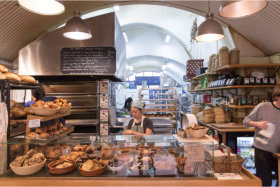 The e5 Bakehouse, also in London, has a shop next door to the bakery, which is in “a spruced up railway arch beneath London Fields Station”.

A video on the website shows the arched ceiling above the bakery and shop. They say the location offer big spaces good for transport links, and in 2015 they took on their third arch to house a stone mill.

Bakeries in the Second City

Peel and Stone in Birmingham is known to the public mainly for its little sandwich shop at the front of the arch, which was listed as one of Britain’s 30 best places for brunch in the Daily Telegraph in May. 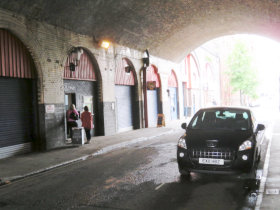 I’ve been popping in here for a year or so now for imaginative sandwiches and salads, or something hot if preferred. However, their main output is selling bread wholesale to pubs, bars and restaurants.

Peel and Stone evolved from the Soul Food Project: initially a small catering operation, providing food for an inner-city pub that was influenced by the cooking styles of the southern states of America: jambalaya, gumbo, and other things in that song by The Carpenters. Later the Soul Food Project took on its own pub – The Church in the Jewellery Quarter. The Church ran for a year selling the same style of food before the Project expanded by opening the Peel and Stone Bakery in Arch 33 on Water Street – a small Peel and Stone café and shop has opened recently in Harborne.

When I was allowed behind the shop inside Arch 33, it reminded me of an aircraft carrier. There are no windows – the bakery has a false ceiling and installed ventilation. The arch is high and wide because overhead is Snowhill station with its rail and tram lines. The space is rented from Network Rail and, important for a small growing business, reasonably priced.

Temperatures are moderated a little by the ovens, but away from them it is hot in summer and in winter it is cold. The day staff are in at 6.30am, and the night staff leave around 4.00am.

The bakeries I spoke with do like their curvaceous locations and, if railway arches seem a little eccentric to some … well, maybe just one or two of the bakers are too.

The interview I recorded with Dave Finn as part of the research for this article will be broadcast on Sunday 9th July around 9.15am on WCR FM (www.wcrfm.com). Next week I’ll try to put a copy here if you miss the broadcast … though the whole show will be available on Listen Again on the WCR FM website for a few weeks.

A shorter version of this article was published in the July – September issue of True Loaf, the magazine published by the Real Bread Campaign. There you can read all about Real Bread, find how to celebrate Sourdough September … and, if you’re not sure, find out what real sourdough is and why you probably can’t buy it in many if any supermarkets. 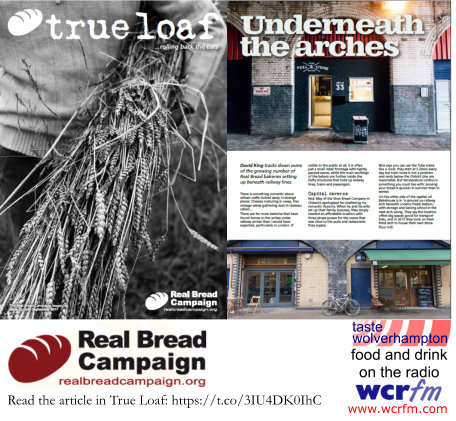 There are some places in Wolverhampton that have had a grade 1 for months. Shouldn’t they close until re-inspected and approved by Wolverhampton City Council?